The Cognitive and Decision Sciences Lab works within the simple heuristics framework. Simple heuristics are cognitive processes that use limited information to make effective decisions in an uncertain world.  Much of this work is informed by the ACT-R theory of cognition that supports the development of computer simulations that make quantitative predictions about human behavior and the neural correlates of that behavior.  The group uses computer simulations and behavioral experiments to help explain how people make decisions and how they could make better ones. 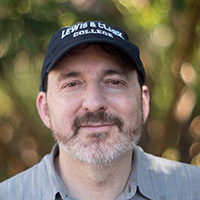 Lael Schooler is a Professor of Psychology at Syracuse University in the Cognitive, Brain and Behavior area, where we are growing in the area of computational psychology. At Syracuse he continues research started as a Senior Research Scientist at the Center for Adaptive Behavior and Cognition (ABC) at the Max Planck Institute for Human Development in Berlin. Inspired by Herbert Simon’s notion of bounded rationality, Lael investigates simple heuristics—cognitive processes that use limited information to make effective decisions in an uncertain world. Much of his work involves grounding simple heuristics in the ACT-R theory of cognition. Lael’s colleagues at ABC with input from the ACT-R community reflected on the implications of integrating the ABC and ACT-R research programs. You can read more about that here.
After graduating from CMU, Lael worked with Richard Shiffrin and Jeroen Raaijmakers at Indiana University and the University of Amsterdam. During that time they developed REMI (Retrieving Effectively from Memory Implicit), a model of implicit memory phenomena grounded in an appreciation of the adaptive nature of human cognition. Before joining ABC, he was an Assistant Professor of Psychology at Penn State.